Stood in the sunny grounds of Maindiff Court Hospital, representatives of a wide range of local organisations and ex-Forces veterans came together to officially open a new accessible therapy garden for Armed Forces Veterans on Monday 18th July 2022.

The project started back in June last year when Veterans NHS Wales (VNHSW) in Aneurin Bevan UHB with support from Monmouthshire County Council, successfully put in a bid to the Covenant Trust Fund’s Forces for Change grant for the establishment of this important outdoor space, less than two miles from Abergavenny in the grounds of Maindiff Court Hospital.

The Project Lead, Damon Rees from Aneurin Bevan Veteran Service brought people together from all corners of the community for the opening event, including Veteran Service, Heads of Departments from AB UHB Adult Mental Health & Learning Disabilities Directorate,  Monmouthshire Armed Forces Forum, veteran charities such as Change Step, Royal British Legion, SSAFA (Soldiers, Sailors, Airmen and Families Association), Blesma (Charity for Limbless Veterans) and Way of the Warrior. All have embraced the project idea and agreed that it would improve wellbeing. Additionally, the further proposed developments of the Veterans Service therapy garden at Maindiff Court Hospital will provide an opportunity to help reduce loneliness and isolation. 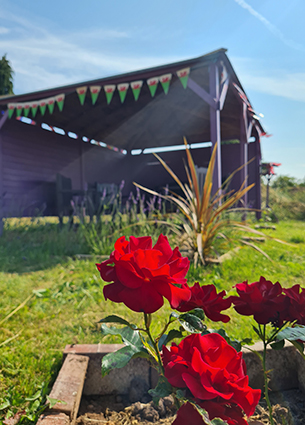 Cllr. Peter Strong, Monmouthshire County Council’s Armed Forces Champion, said: “Therapy gardens are recognised to help those suffering trauma, and offer a quiet, beautiful and mindful place to spend time in either before and/or after receiving specialist psychological therapy for service-attributable mental health difficulties. I am so pleased to see this important project come to fruition – it will mean a great deal to veterans accessing the service and their families.”

The new garden includes a seating area under cover provided by a pergola with a Remembrance Bench an important main feature, along with three steel soldier silhouettes representing each of the Armed Forces, with flowers planted that also represent remembrance. A gravel path has been constructed to the seating area to allow wheelchair access.

Cllr. Peter Strong, added: “It’s fantastic news that gardening sessions will be hosted at the therapy garden in the near future, thanks to the people at Growing Spaces and at Caerphilly Horticulture Society, to help the veterans develop the space further and, in addition, give them the chance to gain a Level 2 & 3 qualifications in horticulture if they would like.”

Project Lead and Peer Mentor for the ABUHB Veterans Service, Damon Rees said: “I would like to thank everyone for attending our opening event today at Maindiff Court Hospital. The garden is already being used by our veterans service users and feedback has been incredibly positive. This is a space for the veterans, it belongs to them to use and to develop further. Today marks the laying of the foundation stone for our veterans who have had the courage to come forward for mental health support”. 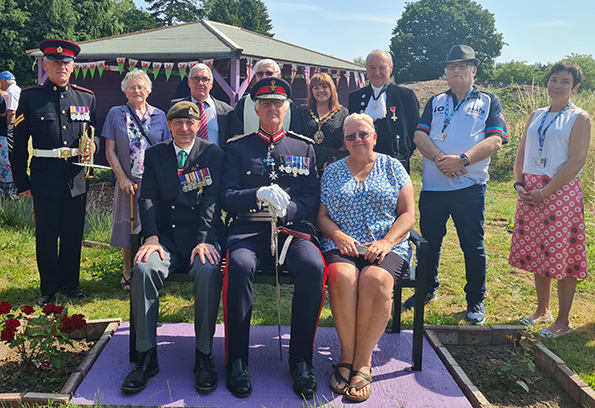